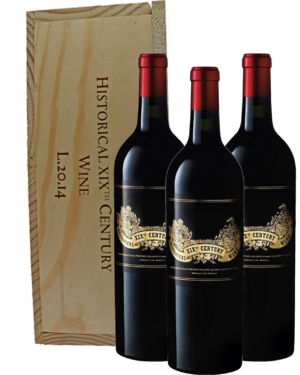 In the 19th century, a common practice at that time was to hermitize wines. The Bordeaux châteaux added a proportion of Rhône wine - particularly from the Hermitage region - to strengthen, thanks to the syrah, the structure and power of their clairets.

There are still a few bottles dating from this period, associating the name from the cru with the mention "hermitagé" on vintages prior to the AOC regulations which put an end to this practice.

In the 21st century, Château Palmer had the idea of ​​bringing this forgotten tradition back to life. Years ago, while on a trip to a great Californian collector, Thomas Duroux - director of the property - had the opportunity to taste a 19th century hermitage. The emotion felt that day at this more than a century old wine found expression in the rebirth of Palmer's hermitage, the Historical XIXth Century Wine. A wine that is definitively "historic" and whose name pays homage to the past of the great wines of Bordeaux.

Nevertheless, it is no longer a question of boosting a thin, clear to give it muscle, but of creating a unique wine, combining wine. de Palmer and, in a moderate proportion, a great wine from the Côtes du Rhônebseptentrionales.